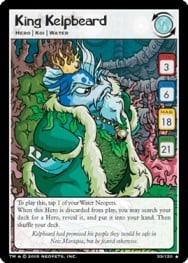 The Neopets Trading Card Game (tcg), was released in September of 2003. To date, there is a base set of cards and six expansion card sets. The first expansion set was based on the general characters/theme of NeoPets. The following sets were based up stories; specifically, a) Battle For Meridell, b) The Return of Sloth, c)Mystery Island, d) Hannah and the Ice Caves, e) Curse of Maraqua and f) The Lost Desert.

There are nine different types of NeoPets Trading Cards. The first four–Basic Neopet, Experienced Neopet, Hero & Villain–are character based. The cards are used for battles.

These cards list four abilities: strength, agility, magic and intelligence. The higher the number the more of the trait, so for King Kelpbeard, he is low on strength and high in intelligence.

The Item and Equipment cards are used to increase the Neopet’s 4 abilities or have other effects on game play.

The Something Has Happened! & Fate cards can dramatically change the outcome of the game.

The Location cards can give an advantage to one kind of Neopet over another.